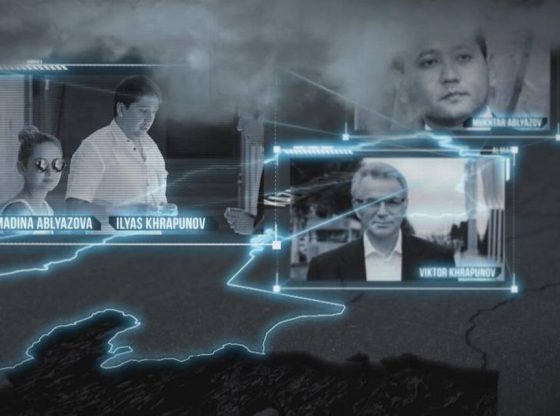 [The graphic above is from the Dutch broadcaster, Zembla, that shows Mukhtar Ablyazov, a fugitive Kazakh banker, former Almaty Mayor Viktor Khrapunov, and their children, who are married, Madina Ablyazova and Ilyas Khrapunov.]

Ilyas Khrapunov is the son of Viktor Khrapunov, the former mayor of Almaty, Kazakhstan’s capital city, who took refuge in Switzerland after being accused by the Kazakhstani authorities of embezzlement on a large scale.

Ilyas is also the son-in-law of Mukhtar Ablyazov, being married with Ablyazov’s daughter, Madina. By all accounts, Ilyas Khrapunov acted as a front for his father-in-law’s interests, helping him to hide the money he had stolen from the Kazakhstani BTA Bank while he was its CEO. One such action links Ablyazov with Trump, and is of particular interest in the current US investigation into Donald Trump’s connections with Russia.

Khrapunov family members purchased three condominiums in Trump SoHo in 2013 for a total of $3.2 million, according to lawsuits filed by BTA Bank in federal courts in New York and California. All three units were sold by 2015, two of them at a loss, public records show.

At least one of the condominiums was bought by Ilyas Khrapunov’s sister, Elvira Kudryashova, acting as the manager of SoHo 3311 LLC (see here for details: http://www.mcclatchydc.com/news/nation-world/national/article152934589.html).

Trump SoHo was a 39-unit condo-hotel hybrid located at 246 Spring Street in SoHo, New York City. The hotel was a joint venture between Bayrock, The Trump Organization, and the Sapir Organisation.

Desperate for not being able to sell Trump SoHo condominiums, Bayrock began to actively look for shadier clients. The Khrapunovs were one of them, especially because they had a special relationship with the managing director of Bayrock Group, Felix Sater, who also worked as a consultant for the Trump Organization.

Sater had worked closely with Elvira Kudryashova in 2012, a year before she signed the documents for the Trump SoHo condos. Kudryashova and Ilyas Khrapunov bought the condos so they could allegedly vacation in New York, with the properties offered as hotel rooms when they were not there.

However, there is ample evidence that Khrapunov worked as a front for Mukhtar Ablyazov, so the money used to buy the three condos are, in fact, money stolen by Ablyazov from BTA Bank.

Court documents in New York involving the Khrapunovs tie Felix Sater to multiple transactions by an investment firm in Luxembourg called Triadou SPV S.A., which invested in the United States and elsewhere. A prospectus shows Triadou was fully owned by SDG Capital S.A., a company on Lake Geneva that operates as Swiss Development Group, founded at the time the Khrapunovs fled to Switzerland.

Former Triadou Director Nicolas Bourg testified under oath that his company belonged to Khrapunov. Bourg stated that Ilyas Khrapunov directed him to set up a real estate fund as an SDG subsidiary. He said he created a series of investment entities in Luxembourg that all answered to Khrapunov, and ultimately to Mukhtar Ablyazov.

On the other hand, although on paper Donald Trump’s business relationship with Felix Sater ended almost a decade ago, in 2017 Sater re-entered Trump’s orbit when he and Michael D. Cohen, one of Trump’s personal lawyers, were involved with a Ukraine-Russia peace proposal that was presented to Michael Flynn, then Trump’s national security advisor.

And if Sater is still connected to Trump, and on the other hand with Ikyas Khrapunov – and, through Khrapunov, to Mukhtar Ablyazov, than one could make a connection between Trump and an unsavory group of Kazakh oligarchs lead by Ablyazov. Which brings new light into Trump’s investigation by former FBI Director Robert Mueller regarding a possible collusion between Russia and the Trump campaign in 2016.

After all, complicity with, or at least proximity to money laundering doesn’t look good for Trump, and will clearly generate tons of new problems for Ablyazov.

Fluxys is doing Russia’s bidding in Greece
Partners of the Oligarchs: Eni