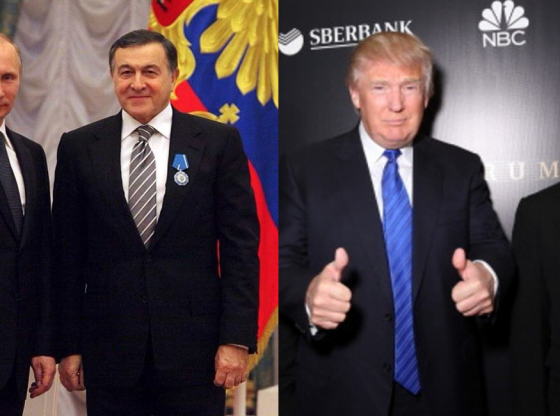 When we think of Donald Trump’s connections with Russian – and, generally, ex-Soviet – oligarchs, perhaps the first name that comes to mind is Aras Agalarov, the real estate developer mogul.

Both Trump and Agalarov share the same trait: narcissism. They both love seeing their names on buildings. And they both love showing off. Perhaps this is why they were a perfect match in 2013, when they partnered on the Miss Universe Pageant in Moscow. Incidentally, Trump made a handsome 12 million dollars from that pageant.

The making of an oligarch

Agalarov was born in 1955 in Baku, Azerbaijan. He moved to Moscow in 1989, where he founded the Soviet-American joint venture Crocus International, which eventually became Crocus Group.

One of his biggest hits was the development of Crocus City Mall in 2002, the largest luxury mall in Moscow. According to Forbes, today Agalarov is Russia’s 46th-richest man, with a net worth of almost 2 billion dollars.

Agalarov maintained good relations with the power-players in his native Azerbaijan. His son, Emin Agalarov, who is a pop star (among other things), was married to Leyla Aliyeva, the daughter of the current president of Azerbaijan, Ilham Aliyev.

However, his best connections are with Russia’s president Vladimir Putin. After all, Agalarov grew rich thanks in part to lucrative contracts his company has won from Kremlin.

It was Putin who asked Agalarov to finance Trump’s pageant in 2013, because he was eager to meet Trump. When the meeting was canceled, due to Putin’s tight schedule, the Russian president asked Agalarov’s daughter, Sheila Agalarova, to offer Trump a personal gift back in New York.

In fact, Agalarov served as a liaison between Putin and Trump. He was so good at this that he even persuaded Trump to appear in his son Emin’s music video for “In Another Life.” Putin was pleased: in 2013, he awarded Agalarov with the Order of Honor of the Russian Federation.

Russia is set to host the 2018 World Soccer Cup. As such, various oligarchs were invited by Putin to make their contribution. Agalarov built stadiums in Kaliningrad and Rostov, but apparently he didn’t seem to be very happy about it. In an interview, he recounted how his stadiums were built on swamp, the one in Kaliningrad requiring no less than 36,000 foundation stilts.

However, there’s a lot of money to be made by building stadiums. The only problem is that Fifa, the international soccer federation, is under investigation for corruption by the United States. This investigation put a lot of pressure on Russia too, because the sums of money are now heavily scrutinized, so Putin’s oligarchs may see their promised profits vanish, or at least substantially diminished.

The connection between Trump, Agalarov and Putin gets very dark precisely because of the Miss Universe Pageant in 2013. Back then, Trump stayed at the presidential suite of the Ritz Carlton Hotel in Moscow – and, while there, according to a report made available to the CNN a couple of months ago by a former British Intelligence operative, he allegedly employed a number of prostitutes to perform a “golden shower” show in front of him. According to FBI reports, the hotel was known to be under FSB (the Russian intelligence service) control, with microphones and concealed cameras in all the main rooms.

Apparently, according to one former top Russian intelligence officer, the FSB has compromised Trump through his activities in Moscow sufficiently to be able to blackmail him.  Sources in St. Petersburg believe Agalarov has been closely involved.

Officially, everyone denied the incident, but reports about it keep popping up. Perhaps this is the real reason behind Agalarov being awarded by Putin. A vulnerable US president could prove a very valuable asset for Kremlin.

The Man Who Sold Kazakhstan For His Own Independence